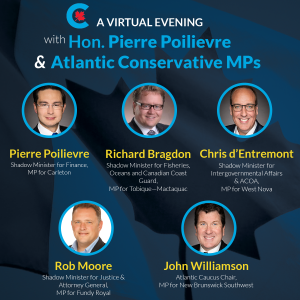 I wanted to let you know about an upcoming event the Fundy Royal Conservative District Association is hosting in partnership with the associations of the three other Atlantic Conservative MPs.

On March 13 at 7 PM we will be hosting “A Virtual Evening with Pierre Poilievre & Atlantic MPs” where we take to Zoom. This will be an opportunity to ask questions to Pierre, our Party’s Finance Critic, as well as Richard Bragdon, John Williamson, Chris d’Entremont, and myself.

Tickets are $60 and eligible for a tax receipt. By purchasing a ticket, you are directly supporting our campaign efforts as we head towards the next election.

To purchase your ticket for this event, click here.

If you would like to purchase by cheque, you can send the amount to:

You can also contact Diane Kallar directly at: kallardl@nb.sympatico.ca or 506-650-4263

With a lot happening in Ottawa over the past several months, this will be a great opportunity to hear from Pierre on the state of Canada’s finances, as well as from Atlantic MPs on how we’re preparing for the next campaign.

I hope to see you there.

Fundy Royal has been represented under various names in the House of Commons since 1917. The Riding roughly covers the area in between Fredericton, Saint John and Moncton.  The Fundy Royal population as of the 2016 Canada Census is 79,943.  Rob Moore, MP currently represents the Fundy Royal Conservative Party and is the elected Member of Parliament.

Fundy Royal is situated where urban and rural communities are within a short drive of each other allowing Families to be able to work and spend more quality time together.

Fundy Royal is a source of diverse knowledge, education and experience.  This diversity brings innovation, creativity and prosperity to Fundy Royal.

We have so much to be Proud of in Fundy Royal.