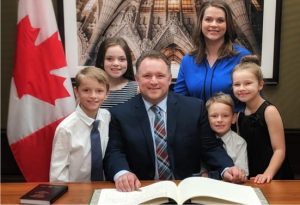 Rob is currently the Conservative Shadow Cabinet Minister representing Justice and Attorney General of Canada.  It will be Rob's responsibility to hold the government accountable and ensure legislation meets the highest standards and that all Canadians rights are protected.

Rob has served as Chair of Standing Committee on Canadian Heritage, Parliamentary Secretary to Minister of Justice and Tourism, Minister of A.C.O.A. as well a regional Minister for New Brunswick and Newfoundland and Labrador.

Rob likes spend quality time with his Family on the Belleisle Bay during the Summer.  Rob also enjoys playing hockey and off roading. Rob and his wife, Melinda, live in Quispamsis, New Brunswick with their four children, Madeline, Katelyn, Robbie and Luke.